How many ways are there to fix a broken snowshoe? Well, lock three engineers in a remote mountain hut and they'll come up with a long list. Put those same three engineers in a remote mountain hut without tools and materials and they'll pretty soon work out that the real-world options are close to zero. Close but not quite. A first attempt with mild steel strip, a hatchet and a nail came remarkably close but failed on account of the nail being the wrong diameter. A second attempt with a metre and a half of Bob and Roses glow in the dark guy line and yet more duct tape herded all the separate bits back into a single piece of outdoor kit. As I stand, favouring my good snow-shoe, under soft morning light in front of Nonsbu to take another photo before moving of I am wondering just how long the low-tech repair will last. Other than the snow-shoe krypton factor and a spectacular sunset that turned out to be the lights of Tromso, the evening before had been comfortable and uneventful. Comfortable and uneventful hut nights are, as it happens, just the thing for separating February days in Troms. I'm very sure that a cold night spent listening to the mad flap of tent fabric in anticipation of a breaking pole and a mad rush to make good, would have left me somewhat less refreshed and raring to go. Given that, had we camped, we'd most probably still be digging parachute anchors out of snow with the consistency of Bell Metal, we'd have been later starting out to.

We haven´t seen a forecast. Nor have we been visited by a Swedish female nocturnal snow runner carrying false messages of improving weather. All we have to go on is the here and now and, frankly, I like what I see. As we move away I´m almost convinced that we have a half decent chance of a fine day. We drop down a few metres to cross a stream bed and then swing round to the North East. On our right hand lies a massive virgin snowfield. Perfect white, unmarked by man or beast and enclosed between the bulk of Rund Fjellet and a line of peaks that rise, all of a sudden, on it´s South-Western edge. Little interrupts the white other than a subtle play of light and the odd isolated tree. The trees have my attention. They look like they don´t belong. Bent and twisted I get the feeling that they´re being taught regular hard lessons. Those that dare grow too tall are all, literally, cut short by the wind. It takes me longer to work out than it should but standing in the ridge line bounding the South-Western edge of the snow-field is yesterdays bagged top. From this side, as small as it is, it looks imposing. Steep, too steep to hold snow, a glowering black boundary wall. Looking from this side I´m suddenly glad that we didn´t drift East on yesterdays long blind bearing.

As we move through this wild place the sun hangs low in the sky. Giver of light and life what must it be like to see it reappear after the long, dark arctic night? Right now it´s giving a beautiful soft low light. My camera says cold blue. My eye says warm bronze. One of us is confused. Whatever the colour, a photographers dream, it turns every millimetre high ripple on the snows surface into a line of defining contrast. I feel the urge to just stay put and watch the world spin past me. I keep moving though pulled along by a need. A need to see what´s on the other side of every brow and round every corner. Every step reveals new interest. Snow sculptures. Mountain profiles. Tree studded distant hills every bit unshaven chins. I think of Benjamin, placing his little hand against my stubbly cheek and saying "spikey". Light we get but giver of life? As warm as the light looks there's no discernible heat in it. I turn the bare skin of my face towards it and close my eyes but feel nothing but cold. If there´s a heat signal in the rays striking my face I can't feel it above the noise. Winter still has the upper hand. Wind her weapon of choice. This land hasn´t woken up yet. This world of white is reflecting everything the sun throws at it. Giver of light and life it may be but today, here, giver of warmth it isn´t.

Our route lies some way of the marked route and takes us over a little top at three hundred or so metres elevation. On the top we feel the teeth of the wind again but are rewarded with long views over Skittenelva and beyond to Grotsundet. The air is clear, the light is good and I have a strong sense that we´re on the front edge of the high point of this trip. We survey the ground ahead and decide to follow the line of sight to the next little top three kilometres distant. Geithaugen looks like a great vantage point from which to peer over more of this magical landscape and, at this rate, we´ll be there in time for lunch. As we stride out I can already see the snow bench cut into it´s lea slope.

We stomp forward, single file, pretty much along a single contour but working through fine-scale rise and fall that, tough it doesn´t find it´s way onto the map, I can still feel in my thighs. We cross stream beds, pass through stands of birch and cut across open spaces, always with the valley and the flank of Snyfjellet on our right hand. We move up the slope onto the top of Geithaugen and find a reward out of all proportion with the few metres we've had to climb. The view, long and uninterrupted, is magnificent. Sea, mountain, sky. Its all right there before me. Despite the wind we hover on the summit, feet lost in swirling white, soaking it all in. Then we drop off the North side, just a few metres but enough to gain some shelter, and Willem-Maarten cuts a bench. Today, for the first time this trip, we'll stop and take a proper lunch. As we sit cocooned in down we chew, observe and say little. On such days food tastes good, especially hot food, but location is nine tenths of the experience. I set up the camera and take some shots with the remote. Some of our lunch spot. Chimping as I repack the camera I see that we look like an add for PHD. Truth is we're sponsoring them not the other way round. As great as it is here we don´t linger. Rations consumed the chill takes hold and, after one too many cold blasts of drifting snow from behind, we pack up quickly, strap on snow shoes, strip layers and move out. First, to avoid the too steep Northern side, heading in totally the wrong direction, but soon switching back on the gentler eastern flank . Then, as if I haven't had enough reward already, I'm treated to a true highlight. I've long believed that adversity is the taxation of hillwalking. Hang around long enough and put up with enough shit and the mountains will repay you for your effort. Today is pay day with a bonus thrown in. Just two hours ago I thought the light perfect but It's just got even better. My camera stays at my eye and I find myself moving in short spurts. Step up the pace, pause, frame, shoot, repeat. Willem-Marten and Thim, striding out and kicking up plumes of white, provide foreground perspective and movement against a background of pure winter.

The next hour becomes a blur. I´ve been looking for more of this since that evening in Oyer in 2010 and, on the back of the winter storms, its taken me by surprise. The pace slows right down. Even Willem-Maarten slows to a shamble and, as I find myself ahead of the group for the first time in days, I look back and watch my friends, good friends, get their kicks. Smiles on every face. Sometimes its good to share. We slowly work our way into the neck of trolvasdalen and make for higher ground on its western side. First across a wide sweeping flat, home to an army of Ents, that leads the eye to a first glimpse of Ullstinden. On the map clearly a majestic hill but in real life, its huge bulk rising a 1000m straight up from the shore, a thousand times more impressive. I feel the need to climb it but not today.

Instead, after a quick conflab, we choose to make use of the remaining light to climb up to the Trollvatnet. Willem-Maarten reverts to type and scoots off like a ferret up drainpipe. Thim follows and I follow Thim. Though the numbers don´t suggest it, for me, the climb feels long and hard. For the second time this trip a switch gets thrown inside my head. All at once the post-lunch euphoria ceases and I'm in a fowl mood. The last kilometer becomes a sweaty, sweary, stumbling affair and I'm sure, as I approach the top, my companions see it written across my face. I turn away to look over the lake that's not there, delve in my pocket for my last eat natural bar and chow down. The heady hit of chocolate and nut throws the switch again and my happy circuit starts to hum again. The lake, invisible under layers of white, sits in an impressive, deep sided, corrie. A cathedral to the gods of glaciation. Turning around again the true reward becomes apparent. On the climb a long wide- angle view of the troll and oldervikdalen and Ulls and Urtinden had sneaked up behind me. I now get to dive into it in slow motion on a long gradual descent under the last flicker of the days light. What a contrast from twenty four hours previous. Trollvassbu, our most probable destination, though a tiny dot, is visible. No need for blind compass work we can simply walk in a straight line and enjoy the scenery.

Tent or hut? Half way down we regroup and vote. I keep my cards close to my chest but secretly want to stop right here and pitch the tent. The nays have it though and, as the light finally fails, I follow the others to the hut and through the door. 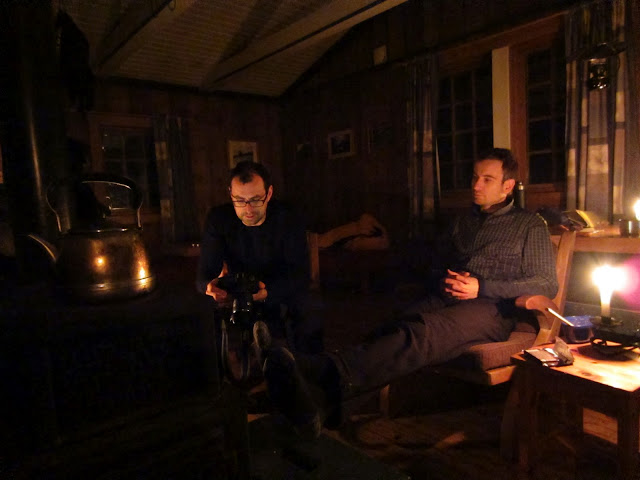 Photo courtesy of Willem-Maarten van Haaften
Posted by Unknown at 22:39