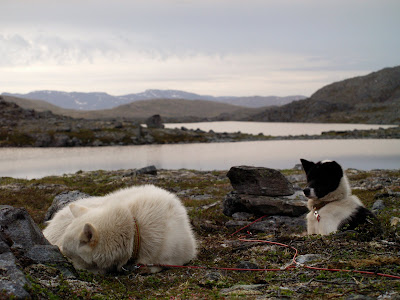 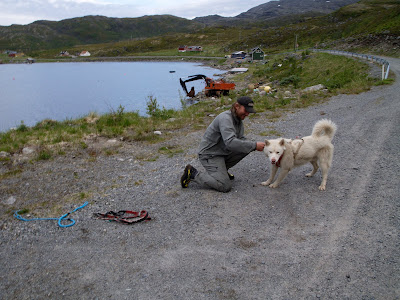 The crossing is short and the drive that follows both short and beautiful. In just a few minutes we've passed through the small collection of wooden houses that constitutes Hornseby and have parked close to village in a gravel lay-by . Then we're kitting up and getting ready for the off. Randulf asks if I want to take a dog straight from the off. I hadn't anticipated that would be an option thinking both the dogs and myself would want time to get accustomed to the idea but I guess if you're in for a penny the pound's as good as a done deal and nod in the affirmative. Then follows a seemingly well practised routine. Randulf kneels down behind the car, opens the boot a crack, reaches in and grabs one of the dogs firmly by collar. Then, a moment almost too short for me to take in, sees the boot door opened and closed , one dog whining in disappointment on the inside and the other bouncing around on outside with Randulf doing a passable impression of a Rodeo star behind it. The action replayed and some fiddling with rope and webbing sees both dogs harnessed. Packs get hoisted, dogs get clipped into waist bands and then and I get a short reading of the rules from Randulf. The rules are short and simple: the dogs must be kept on the lead at all times. If they get away from their handler and attack a reindeer they will most likely get shot. With my new found and acute sense of responsibility, the dogs excitement impossible to contain any longer, we're setting off back along the road.
I pause while Thule sniffs and scurries around in the verge in front of the last house on the road. Before I know what's going on he's marked the illustrious start to my dog handling carrier by squatting and dumping on private property. I drag him away along the road feeling sheepish and willing the curtains not to twitch and the door to stay shut. This is my first exposure to the workings of the Greenland dog. It seems the best policy is to watch their every move and expect them to do exactly what you don't want them to do at exactly the time you least want them to do it. I'm relieved when, in just a few more steps we turn off the road and head up a steep grassy slope and out of sight. A moment later, as I skip and scurry through scrub and bushes at a pace set more by Thule than myself, I feel the first beads of sweat running down my back and I realise, after the months of anticipation, it's really started.
We don't follow the route marked on the map but rather keep to the east in order to gain some height and stay out of the marsh. The going is pretty gentle. Wet underfoot but not very steep and not too densely vegetated. With a bit of dodging and weaving the worst of the wet is easily avoided. A few mosquitoes buzz around my head but they're not in such numbers nor so intent on blood that it's an issue. Thule has settled into a steady pace. He toos and fros a little, sniffing around and checking things out, but basically keeps to plan. An occasional bad call, on his behalf or mine, sees us passing a tree on opposite sides each pulling the other on a tight rope but a little backtracking has us both back in the groove. Staying balanced takes a little more effort than usual but on the whole Thule is taking some of the effort out of the climb. As we climb the trees thin out the bushes dwarf and a carpet of bilberry forms the backdrop for a scattering of rock. We arrive at a short string of pools and take the chance to take a draft of cold, clean, Seiland water. The first of many. I've been thumbing our route as we've gone getting the measure of the statens cartography. The detail on the map is reassuringly visible on the ground. The tiny pool separating the two bigger ones in the string is marked and the bigger ones themselves are recognisable from their profiles. The long view makes sense too. The twin pyramidal points of Veggen are right where they should be. 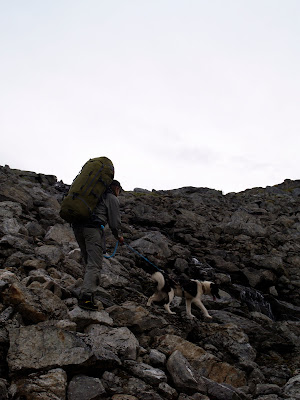 As we pause the mosquitoes begin to annoy a little more. I break out the deet, strong stuff, imported from Canada, tried and tested. The activity abates a little but the best policy is to keep moving and so we do. We head South, climbing a little more steeply and soon after get a first taste of rock hopping. It's been a while. Dogs add to the fun. With another hundred metresor so underneath us we skirt around the base of the Glimmerfjellet and into the mouth of the Buogovarceabetvaggi. A short pass bounded on one side by the steep Northern end of the long Suolorassa ridge and on the other by the bulk of Eidvagtind Buogovarri it's easier to walk through than pronounce. The pass is decorated with another string of lakes. These more substantial than those we've just left behind. Randulf pauses to check the map and suggests we make out way to the highest lake right at the saddle and set up the tent. The suggestion takes me by surprise. I'd expected to cover more ground today. It does make sense though. We've made some height, I imagine most of the insects are below us, the views are good, and the lakes look like they hold fish. 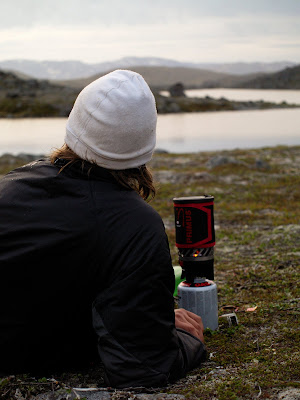 Half an hour later the dogs are on the line the tent is standing and we're drinking coffee and taking in the view. A magical moment. I count my blessings. Something I don't do often enough considering how charmed my life is. 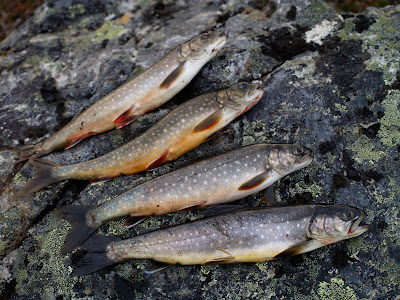 We fish a little. Catch enough fish to make a meal for two. Arctic Char. My first and lovely little lean, red-breasted , pan-sized, examples that give a good fight on light tackle. Eat well. No pressure, no schedule, no plans, just being in the great outdoors. 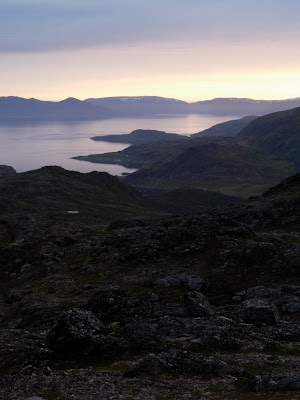 I think to myself that the evening is going just fine but then realise I have lost all sense of time. A glance at my watch tells me it's now gone midnight. It could just as well be three in the afternoon. None of the usual keys are telling me it's time to wind down so I do just the opposite. Gathering my camera gear I head off up the hill in search of the midnight sun. I wander upwards, looking for interest in the fall of light looking for foreground detail and pastel backdrops but the light isn't long and a capture I'm happy with elusive. I've climbed another hundred meters or more before I realise that a clear view of the sun is going to take more effort than I'd banked on. I look at my watch once more and it's gone two. Twenty two hours after shutting my front door behind me I decide enough's enough and head back down the hill with every intention of getting some sleep.