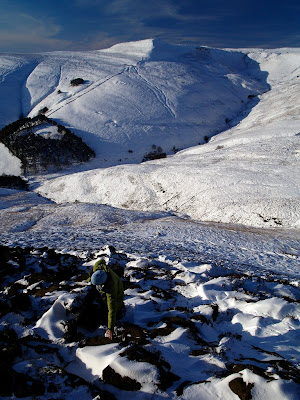 .....but not out with the old. Some of the memories are too special to leave behind. Indoors things went just fine. 2009 brought me Benjamin and Emily continues to amaze. It was a good year, albeit with less sleep than the ideal.
What about outdoors? Well, all things considered, 2009 was't a bad year. Just a few days out and about but fine days indeed. I enjoyed walking with Emily in the AWD for the first time. Watching her revel in her new-found freedom and letting her follow her nose. A taste of bigger things to come? I hope so! The summer brought a glorious trip to the mountains of the North. Rondane now occupies a special place in my heart. Right up there with the Cairngorms. I sense Norway will be the focus of my attention for a while yet. I'll be back there in February. The close of the year brought a real highlight. Short but sugar sweet. A white Christmas in Sheffield. Friends and family. Sledges and snowmen. Christmas as portayed in film and book. Christmas as Christmas should be. The icing on the cake came at the close of the year. The day after the solstice, the true turning point of the year, saw me in the wintery dark peak with Jane. Familar ground rendered unfamiliar by a foot of white powder and cobalt blue skies. Our first walk togther since Garibaldi in 2006. That's too long. Far too long not to have shared a passion with the one I love. But if you are going to wait for three years then let it be for such a day!
And then there was blogging. New found fun. At first compensation for the geography of my home but now something more than that. I marvel at the willingness of a small group of passionate people to share their love of all things outdoors. Their contibutions have, at the same time, brought me closer to home and opened new horizons. You know who you are!
All the best one and all!
Posted by Unknown at 14:14