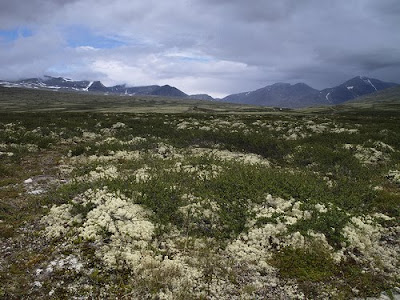 After a night in Rondavassbu I awoke to the stale funk of drying gear and returned hilwalker. A familiar soundtrack was playing in my head, it was the sound of a fat lady singing . The trip, so long in the planning, was all but finished. Breakfast was followed by a short but pleasant enough walk out to the car park at Spranghaugen. Even on a road, It should have been a real joy to walk through more kilometers of this wonderful landscape but as always my mood has changed. I just want to get the journey back to the Netherlands over and done with.

As we approach the car park we pass a very large group of people. People of all sorts. All shapes, and sizes. All ages. Apparently also all levels of preparedness for the outdoors. Many look like they won’t get past Rondvassbu. Our experience of the last few days suggests that this is the case since we've seen remarkably few people. I catch myself in a negative line of thought. With a virtual sneer I think that most of these people won’t see the side of Rondane that I have, that they won’t learn to appreciate Rondane in the way that I now do. However, there’s no room for condescension in this game. Appreciation of these places is so individual. Each gets their own thing out of it and should be left to do so on their own terms. Even in our small group of like minded people, expectations and ambitions differ widely.

The journey back is uneventful. Train, plane and car from the airport gets me home in time to put Emily to bed. I re-walk the route as we travel but, I know that, as is always the case, my perspective will change with time.

As I write this piece I’m looking back at the Rondane through the haze of two months of normal life: busy weeks at work, changing nappies and a family holiday. So how does it all look now that the dust has settled? Well firstly, I wouldn’t hesitate to recommend Rondane to anybody. If you’re prepared to fly, It’s relatively accessible (connections permitting, an early start will have you on the hill on the same afternoon). The area itself strikes me as being suitable for many (but not all) levels of experience and ambition. There are well marked routes that are easy to follow and manned huts that are well provisioned. Ideal for the less experienced or those looking to travel with a light pack. The inexperienced should nevertheless be aware that it’s a remote and mountainous area, high and a long way north, and as such should be treated with due respect. For those seeking more adventure Rondane certainly offers much. The high tops are spectacular places to be and there’s plenty of opportunity for linking them up into the biggest of hill days. Those looking for scrambling and exposure will not be disappointed. If things go the way of the pear the DNT routes and huts offer opportunity for bail out. In my view, the cream of the area is it’s empty center. The three valleys extending from the northern side of the Smuibelgen massief and into the Doralen: namely the Langholet, the Verkilsdalen and Smedbotn are places I could revisit time and time again. In short, they offer what I’m looking for: a strong feeling of wilderness and the north country.

But what of our trip? Well, in retrospect it ranks amongst the best I’ve undertaken. That’s not to say that we got everything right. The route taken was a long way off the route planned. A combination of conditions and terrain underfoot put the planed route out of our reach. I don’t consider that to be a problem though. Planning doesn’t stop when you leave the house. Unpredictability of weather and many other factors will, in my experience, always require decision making on the ground. In Rondane we were forced to make more, and further reaching, decisions on the fly than normal. Old snow, boulder fields, hot weather and the poor availability of water proved to be determining factors which pushed the group to it’s limits on occasion. Nevertheless, whilst we didn’t climb all the 2000m peaks nor cover the kilometers planned we had three full days on which we couldn’t have achieved much more than we did. All in all we used the time available to full effect and I for one left Rondane fulfilled. It also has to be said, knowing what I now know, I wouldn’t trade in the second day through the Langolet and Doralen valleys for all the 2000m peaks in Rondane I’ve not yet done.

As a parting shot here are some additional observations that I would take into serious consideration when planning for Rondane a second time:

Shelter: Given a good forecast I think (as has been suggested already by Roger), that when planning to camp high, the bivvy bag is the best option for Rondane. Above 1400m or so suitable sites are few and far between. Even below the vegetation line, placing tent pegs proved difficult and I expect a free standing design would be the best choice of tent. Even so, sites sufficient to accommodate the footprint of even a modest tent did not appear numerous. The bivvy bag is of course not the best choice in the face of wet weather and mosquitoes. In sustained wet weather the bag can be exchanged for a bed in a hut. Mosquitoes are more difficult to avoid (they were still active at 1400m in July) but sleeping high and praying for wind is the best policy.

Water: Availability of water above the 1600m contour is very limited. Carry enough water if you are heading high. If conditions permit then melt water may provide an additional source but be aware that it is deminerlised and consider carrying additives such as isostar to prevent cramps.

Terrain: DNT routes are well marked and well trodden and allow ground to be covered in good time. Off paths the terrain is hard going. Below 1400m low growing vegetation (bilberry, dwarf birch and thick reindeer moss) saps the energy. Above this height expect either scree or boulder. Boulder fields in particular kill the pace and can be extensive. In some cases we spent the better part of half a day crossing a single expanse of boulders. Unlike British OS or Harveys maps the (otherwise excellent) 1:50000Turkart doesn’t provide an indication of the conditions underfoot.

Season: Although not so extensive as in other areas old snow was still present in July. For the most part this didn’t pose a serious problem but it was a factor which contributed to the decision not to undertake an exposed traverse (Storsmeden-Veslesmeden). Late Summer/Early autumn may be a safer bet. Later in the season would also potentially be better with respect to mosquitoes and scenery. Rondane is renowned for autumn colour.
Posted by Unknown at 15:09