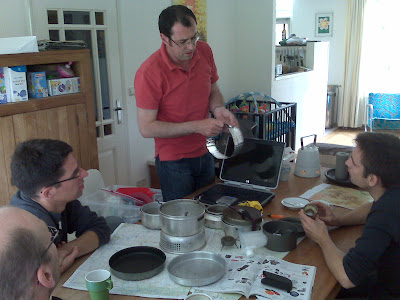 The Rondane preunion was held on Sunday. The group has grown by one to five. Jeffrey broke radio silence to announce he would join us. We are thus the same group as last year in Switzerland. Plans and kit lists were dicussed. First the route sketched by Willem-Maarten and myself, then the gear. The idea is to arive at a route that matches the asperations and the ability of the group and to run through the gear lists so as to weed out as much redundant weight as possible (5 bottles of deet, 5 tick tweezers, 5 stoves, 5 pans all of which are too small, that sort of thing). We've now agreed who will pack what. It's now every man for himself in the run up to departure on July the 3rd. Fingers crossed we'll all bring what we said we would.
The route is still a work in progress. I would describe the first version as ambitious. Theo leans more towards describing it as impossible. Theo has less hours under his rucksack than some group members. He is therefore less inclined to delude himslef that he can do stuff that he blatently can't. He might well therefore be the best judge of things.
Whichever angle you come at it from though, day two, 17km with 1800m of climb and descent is a big hill day. Too big I think for the group in question. Too big, if I'm honest, for me. We normaly plan much shorter days. The camp and the banter in the evenings being as important as the ground covered and the summits bagged. Part of me says that in Norway, given the long days (Sun rise is 3:30Am, sundown11:30), and as long as we pace ourselves, perhaps even preparing a meal and moving on to cover more ground before bedtime, that we could surprise ourselves. Another part of me says, however, that legs that spend their days under desks are unlikely to find the strength for such an onslaught. Besides that, we're all pushing 40.
Still, you can overplan for these things. Nature and mood, the latter especialy so when a group dynamic is involved, always contrive to change things. Rondane seems especially forgiving in this respect because for each day there are numerous options, low and high level and for some of the ridges there are obvious bail outs. Whats more there are huts. Rather than rehashing the plan now we'll memorise the options and re-plan on the fly.
One decision worth noting: we'll be travelling without tents again. We aim to bivvy and will use a tarp/bivvybag combination. Folly? I don't think so. I think its doable a long as we pay heed to the conditions and make the right calls with respect to where we bivvy. Again the huts provide a safety net.
In the next few days I'll try to make time to post more detail on the route. I'm also busy in the bat cave, choosing gear and trial packing so I'll post more on my gear selection and kit list in due course. Oh, and I've had a delivery from Ultralight Outdoor Gear that might interest you. More on that later though.....
Posted by Unknown at 22:15