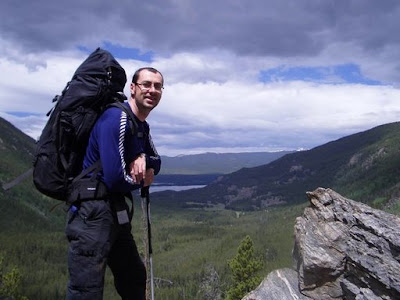 I’m a fairly recent convert to lightweight backpacking. In the late 90’s I watched from a safe distance as companies like Golite first crossed the pond. I read all about the lightweight movement and then read some more. The Ray-Way. Lightweight. Ultralight. Super-ultralight. They all caught my eye but, and this is the thing, it all sounded so different from what I’d been taught or had learned along the way, that I couldn’t switch off the sceptic voices in my head. Single skin tents and tarps where Atlantic depressions rule and Westerlies blow? Rucksacks without frames? Jeepers. That’s all just a variation on cutting the handle off a toothbrush right? Yes it saves weight but isn’t it just getting fixated on weight and forgetting function? Weren’t inner tents and rucksack frames developed with a purpose in mind? 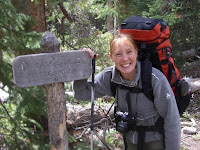 I can remember almost to the minute when I first decided to make a concerted effort to lighten the load. It was June 2004. I was stood, posing for a photo, on a high vantage point on the East Inlet Trail in the Rocky Mountain National Park, Colorado, with the deep, pine filled east inlet valley as a backdrop. Breathtaking (I got there before the pine beetle). The sun was shining and I was stripped down to my baselayer. My best boots were on my feet and my beloved, bomb-proof, Macpac was on my back. I’d just spent two nights at a lovely “backcountry campsite” (the evocatively named “cats lair”) with my wife (then girlfriend) for company. We’d eaten well for those two nights. Fresh food, lovingly prepared, on my all-time favourite piec 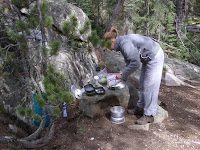 e of kit, my Trangia 25 (bought in 1985 and still going strong). My favourite two man tent (Exped Orion) was packed. It had been used in anger as well! Yes it was 25°C in the afternoon sun but the nights had been cold. We’d even woken up one morning to find the tent decorated with a blanket of snow. In short, I was doing what I liked to do best and the trip had all the right ingredients. Look at the resulting photo and you could be forgiven for thinking I was having fun. However all is not as it seems.

The events of the proceeding three days were running through my head and I caught myself in a strange chain of though. The thought that, although things hadn’t gone quite to plan, although we’d stopped short of the tree line and hadn’t made the continental divide, that it wasn’t down to a lack of will but rather all down to my gear. The thought that, yes we’d turned back some way short of where we’d intended to but we had covered quite a bit of the trail and had done so in spite of all the gear I’d carried. It was the words “in spite of” that got under my skin. Surely, my gear, my wonderful gear, each purchase so carefully researched, was on my back to enable me to get to these places? Apparently now it was getting in the way.

Now I should stress that there were mitigating circumstances. Part of the reason why I’d carried too much was down to sloppy preparation. The decision to make the trip was last minute. I had to attended a conference in Winter Park and the Rocky mountain National Park being just around the corner presented an opportunity too good to miss. Preparations for the conference, together with preparations for an extra week and a half of car touring in Colorado, got in the way of thorough preparation for the hike. I hadn’t researched the route I hadn’t checked the weather patterns and, at that time, I wasn’t certain about etiquette in bear country. As a result, before leaving home, I’d packed a bunch of stuff “just in case”, bought a bunch of stuff in haste and omitted to pack other stuff I needed. The just in case stuff stayed in the pack adding to the load, much of the stuff I’d bought in haste I didn’t use, and, perversely, the stuff I’d not got to hand also contributed to my pack weight: I had no water filter and on reading all the hype about Giardia at the park offices decided to pack in litres of water rather than go back to town an buy a filter. Add to that kit bought over many years for many purposes fro canoe camping to cycle touring and the result is too many kilograms by far.

Whatever the reason, the outcome was a severe case of knee trouble. This wasn’t the first time. It had happed before. But now it was bad. Already, in the first few kilometres of up, climbing out of the valley en route to the cats lair I was in difficulty. My right knee was locking up and stepping up anything more than a few centimetres was painful. Still I’m from the north of England where we know how maintain a positive mental attitude in the face of things grim. I just kept on going. We made the intended pitch but it was clear that the second day would have to be a light one. It was. We walked without packs to the end of the prepared trail and turned back. The walk out on day three was excruciating. Stepping down was twice as bad as stepping up and consequently I made every step down on my left leg. It wasn’t long before my left knee joined the sick list.

So back to the photo moment. Just seconds before I’d been swearing under my breath. Just seconds after I would start doing so again, only this time I wasn’t complaining about my misfortune but about my stupidity. From now on I would do things differently!

I started by reading all that weird stuff I’d read again but, although this time I found it rang truer, I still wasn’t fully onboard. There remained too many what ifs and buts. I still couldn’t quite develop the right mind set. It was a TGO article by Andrew Terril that finally pushed the penny into freefall. Andrew described a minimalist Bivvy trip, also in the Rockies, and there was something about his description and underlying attitude that clicked with me. He brought to my attention the beauty of travelling light, fast and unencumbered, and of going against convention. Climb in the evening and walk out in the morning for a change. Why not? He also helped me see past the numbers. It’s how you function under the load rather than its absolute magnitude that counts. If your load is light enough that it doesn’t get in the way then the number is irrelevant.

Andrews words made it all make sense for me. Even so, the change was much more gradual than I’d imagined. Another trip (see the write up for Cairngorms 2005) came and went and although that went much better I still felt my load was getting in the way. My knees worked just fine but I was having difficulty moving over technical ground and it was spoiling the fun. Holding me in check. Over the last three summers my kit list has changed radically as I try to find a set up that enables me to do what I want. I now know where I need to be. The mountains look very different when your standing under a load of ten kilograms or less. Last year, in Switzerland, I’d got it just right! Each trip is different however and I’m now wrestling with my kit list for Rondane. I wonder If I can get it right this time?
Posted by Unknown at 21:45