My Lowepro Topload Zoom has been with me for a while. It's seen a lot of miles and three different SLR's since its purchase. In many respects it's a great piece of kit. Almost ideal for the purpose. Almost right is, however, basically, wrong. What don't I like about this bag? Well its heavy at 330g. To put that into perspective it represented 25% of the total weight of photographic gear carried when I was using a 20 year old Olympus OM10. Now the numbers look even worse. My Olympus E400 is extremely light for an SLR and the bag I put it in accounts for a third of the weight carried. Most backpackers would, these days, accept that traditional rucksacks are over engineered but my camera bag makes them look featherweight by comparison (on a traditional 15kg load a big pack that clocks up 2.5kg still only accounts for 16% of the total load). However, my gripes extend beyond a backpackers fixation with weight. In addition to being heavy the thing doesn't perform all the functions you would want it to. You would imagine that keeping the contents of a camera bag dry would be high on the list of priorities of any manufacturer of camera bags. Apparently not in this case. My Lowepro is woefully permeable. Another problem is endemic of off-the-peg kit: its not designed around my specific camera and lens collection so nothing fits quite right.

To be fair, a new Lowepro Topload Zoom 2 would, according to the manufacturers data come in at just 260g. Alternatively the smaller Topload 1, which would weigh 60g less would probably be sufficient for my E400 with 14-42mm lens. However, I'm reluctant to make the purchase since I'm not convinced I'll get what I want. For one thing I especially object to buying a bag and then buying another bag to put the first one in in case it rains.
Hours of trawling the web haven't turned up anything more convincing than the Lowepro. It did, however, turn up the details of a home build project that seemed promising enough to be worthy of more attention. The basic concept is quite simple, construct a protective encasement for the camera gear out of foam or some such material, place said construction in a lightweight roll-top dry bag, make a cradle and shoulder strap from webbing and, hey presto, a fully waterproof camera bag. I can see some real advantages: 1) the thing is as waterproof as the bag you put it in and the bag can be changed depending on activity. Choose lightweight dry bag for backpacking and a heavier full-immersion dry bag for canoe touring for instance. 2) the containment can be constructed around your own camera, lenses and accessories. Make multiple variants and you have a bag which exactly fits the gear you chose to carry without redundant volume. 3) It's lightweight! The example on the web weighs around 150g and is good for a Nikon D50 with two lenses. 4) It's simple enough for me to make and, before I even get started, I think I can make some improvements to make it fit my needs better.
I found time this week to knock up a first prototype for the internal encasement. This I made using a cheap and nasty closed-cell foam sleeping mat costing €2.50 from the local D.I.Y store. The first change I made to the design was to dispense with the Duct Tape used in the first example. Duct Tape weighs around 0.15g/cm (I can hardly believe I just typed those words. Looking at it written down it sounds like one of those thoughts that should better be left unsaid!). For the construction I first put to paper this would ammount to 30g of tape to hold 30g of foam together. Seeing an opportunity to halve the weight of the inner I experimented with glue. I know from past experience (don't ask) that anaerobic Cyanoacrylate (super glue to you and I) works well with foam matting. after a little fooling around I found a way of making neat mitred corners by scoring two shallow lines with a sharp craft knife, peeling out the strip of foam between the lines, squeezing a glue line into the groove and folding to form the corner: 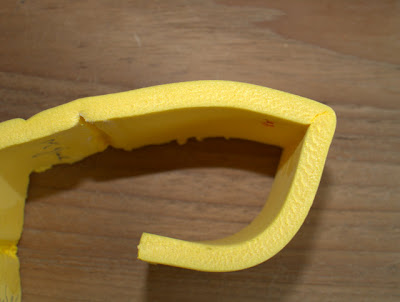 With three such joints and a butt-joint the construction of a rectangular cross section tube was soon realised: 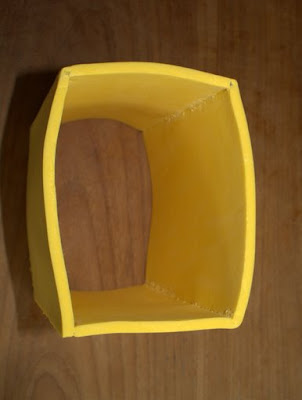 Three mitred joints and one butt joint make the basic shape of the inner.

One end was then closed off by butting a rectangle against it and placing a smaller, tight fitting rectangle on the inside face of the base to create a double thickness. 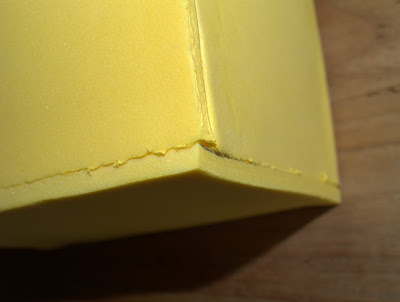 The base was butted against the tube and a second layer added on the inside face.

Since I want a top-loader I had then to create some internal structure to support the camera body leaving the lens suspended in the bag. I made two, double layer verticals, beefing up the top edge by wrapping one layer around the other (the picture does the job better than this description honestly): 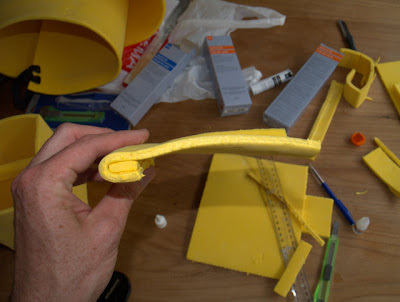 Supports with a "beefed-up" top edge were made as shown above. The example shown would be glued to the side wall of the tube. The other would be free standing and consequently the spacer layer was extended to the full length of the first to provide greater stiffness.

The verticals were then glued into place in the box. They act as supports and create two separate compartments: 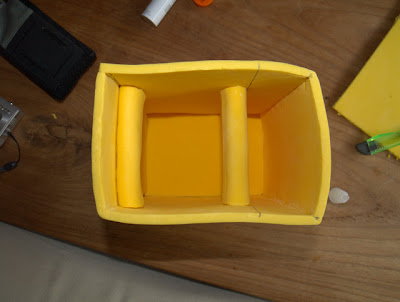 I then constructed a tight fitting hinged lid and the resulting encasement ended up as shown in the next image: 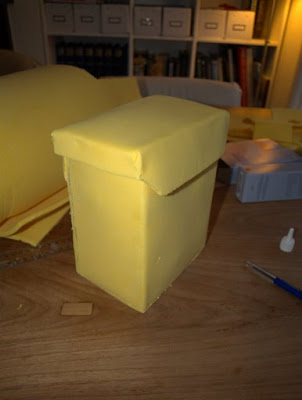 On balance I'm pleased with the result. The integrity of the joints is good. The construction feels robust enough for its purpose (it will not carry any load, that's left to the bag and webbing), it's cheap and the whole thing weighs just 30g. Most importantly I can put one together in half an hour. That means I can make several for different gear selections and can tinker with the designs until I find what works best. This first example almost certainly won't be the final design. With my E400, 14-42mm lens, 25mm fixed focus pancake lens and a couple of filters and media cards there's a lot of space over. I'm also not convinced that the lid, in its current form, will work in combination with a roll-top dry bag. I think it may get in the way when trying to access the camera through the open top of the dry bag.

Still, the most efficient way to improve the design will be to live with this one until I've identified all the glitches. Before I can do that I need to source a suitable dry bag and devise the strapping. When I next make any progress, you'll be the first to know.