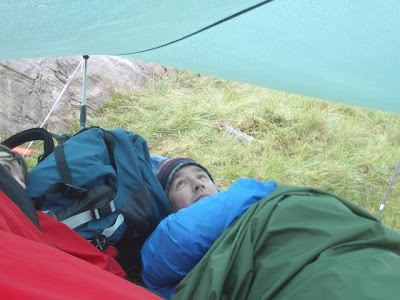 A confession, I’m about to post a review of a tarp. Now I know that the use of tarps in UK climates has its critics. In fact I’ve seen the subject discussed from both points of view quite passionately, so I guess I should state my opinion up front. Saying that tarps are not suitable for the UK is like saying convertibles have no place on British roads. Yes we have a wet and often cold climate, and yes on most days of the year driving with the top down wouldn’t be much fun but then there are those days when driving with the wind in your hair and the sun on your face is a shear joy. Some of the finest roadsters of all time were, after all, produced in Britain!

Although I wouldn’t advocate their use under all circumstances tarps have their place. When conditions are right they are a joy (and I mean a JOY) to use. I have so few days on the hill that I try to squeeze as much out of each trip as possible. Bivvying and tarping helps me do that. It’s stated with monotonous repetition by pro-tarpers I know, but I get such a heightened sense of being outside (“immersion in the environment” I believe its called) when bivvying and tarping that they’re my first preference. I would now only resort to a tent when I’m forced to; when temperatures are going to be too low, when I’m using official campsites, when I’m going to be so far from civilization that easy bail outs are not readily available or when I’m with my wife and a greater level of luxury is required (she’s come a long way but I still have to pay for every night under canvas with a night in a four star hotel!).

“What about the wet and the insects?” I hear people shout. Well, in all honesty, I’ve been dealt some really nastily wet nights and managed to stay dry as a bone under a tarp. That said, I confess I still mostly use one in combination with a bivvy bag. As for midges and mosquito’s, I’ve seriousy never had an issue with them. I put that down to pitching high enough, but perhaps I’ve just been lucky. Ronald Turnbull wrote about being attacked by midges on the summit of Breariach. Admittedly, on such nights there could surely be no UK pitch safe from the misery of the midge, but I’m yet to experience such a night.

“Surely they’re not stable enough in a wind” I hear people retort. I would say it has a lot to do with the pitch. A good tarp well sighted will take a lot of punishment. Likewise a bad tent pitched badly on an exposed site will give the occupants a rough night. Tarps need to be pitched with care and taking prevailing weather into consideration. The same could be said about tents however. Tarps and tents are after all branches of the same technology, they’re both cloth, sticks and string. One major advantage of tarps in my opinion is that they have little by way of a footprint. As long as there’s room for the occupant to lie down and tarp can usually be configured to provide cover. This allows for optimum use of whatever shelter the lie of the land offers.

“What about comfort I hear people ask”. Well that’s where tents win hands down. A dry groundsheet to sit on, an inner tent to deal with condensation and catch drips, an awning to keep wet gear under and cook under etc. Correct, tarps don’t have those things but comfort is relative. It’s all about the expectations of the user. Comfort is no reason to condemn tarp use. Each draws his or her own line. Mine can be measured in the number of nights out. More than three or four nights and I would be inclined to use a tent. Less than that and I can take the hand I’m dealt with a smile and a philosophical nod of the head.

Finally, I might be wrong about this, but I expect the most vociferous opponents of tarps are those who haven’t used them. To those people I would say try it. You never know you might just like it.
Posted by Unknown at 21:39