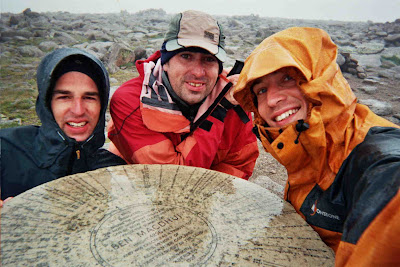 With the first break in the dismal grey comes the first glimmer of a plan. There's been a sudden frenzied exchange of e-mail with talk of blocking days in diaries for a big trip. The same names as usual are on the send list. It started some years ago with a few local outings; kayaking in the surf, canoe camping weekends, but grew to include long weekends in foreign climes. The group waxes and wanes by a couple of head on each occasion but its core is persistent. The climes are normally wet, windy and cold. Mountains and bivvying are a recurring themes.

Setting a date has been complicated by a string of new arrivals. Three of us, myself included now have sons of a few months and younger. Under such circumstances a weekend pass is that much harder to come by. Nevertheless, the pull is considerable. Anything short of a pound of flesh could be considered fair recompense for a big trip. This is the time of year when DIY projects at home tend to get finished.

First comes the date, then must come a plan. As usual this will involve a few evenings spent bending over first time-tables, later maps and finally kit lists. This isn't a hardship. For this group, geography gets in the way of getting away. Any undertaking from a Netherlands base requires time, money and several forms of transport. For a group of frustrated outdoors enthusiasts planning becomes an important part of the whole. If you can’t get on the hill crack open a beer and plan some routes. Do this, preferably, in the company of friends.

We almost have a date, it looks like it will be late in the year, probably September and, in good Blue Peter tradition, we have numerous half-made plans. Stockpiled routes, half ideas and long standing dreams scribbled on wish-lists. The task is now to work a couple up into doable and affordable schedules and set one into motion. A few possibilities have already been tabled. Scotland has made an early appearance Corrour to Fortwilliam via the grey corries, the CMD Arête and the Ben or alternatively Glen Etive to the Kings House Hotel tracing the high ground between Ben Starav and Sron na Creise. Other early runners include, the Swiss Alps (Kandersteg?) and Norway.

All this promises to provide plenty of opportunity for some top drawer armchair adventuring!
Posted by Unknown at 21:16