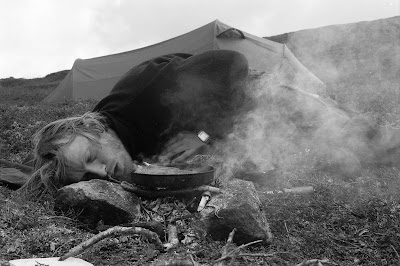 All this talk of upcoming trips has got me all fired up. That Norway has been raised as a possibility just makes things worse. The far North exercises a strong pull on me. I don't fully understand why, but it has done for as long as I can remember. It's a magical place. Especially in winter. Of all the worlds landscapes it's the sub-arctic and arctic that appeal to me most. Perhaps that's why the Cairngorms, where the latitude and an extra 1000m contrive to create an arctic in exile, fascinate me so. One thing for certain, time spent in north America has taught me that I prefer my wilderness devoid of trees. In Colorado you can get altitude sickness on a walk in the woods. In Norway, getting above the tree line is within easy reach of even the most ardent desk Jockey, if you don't fancy the climb then just drive further North.
One trip to Scandinavia stands out above all the others. In 2001 I joined a Norwegian friend, Randulf Valle, for a few days in Trondheim. On the itinerary, in addition to a beery night in Trondheim and a paddle in a sea kayak, was a fishing trip in Gressamoen National Park (now part of Blåfjella-Skjækerfjella National Park). Not just any old fishing trip though. A fishing trip that involved a days hike into a trout stream and two nights under canvas in some of the finest wild-country I've ever had the privilege to visit. The trip was made all the more special since it was spent in good company; the company of a man who is clearly equally at home outdoors as indoors. It wasn't all roses though. The first day was one of the wettest I've ever experienced in the hills. Something that just had to be got through. Norway's tourist tax. The final day, walking out under the September sun in short sleeves, made me appreciate all the more, that in what we do, you have to take what you're given. Normally the balance sheet evens out.
Also special was the chance to be guided through the outdoors by a local. Outdoors people the world over have a lot in common, but there are also clear cultural differences. In the UK hillsport has its roots in Alpinism. The majority set out to go to the tops. The gear we use and the clothes we wear would be just as suitable, if not more so, in the Himalaya as in Locharber. Bushcraft, survivalism, or whatever label you give it, is viewed by many with a cocked nose. Graduates of the Ray Mears School of the outdoors viewed with a suspicious sideways glance. Olive green clad, knife toting weirdos. On this issue, one weekend with Randulf, changed my perspective. In Norway a fishing rod and hunting rifle are as much a part of hillsport as Vibram soles and Goretex. Camp fires and real food under a starry sky lift the spirit to a place few YHA membership card holders could ever imagine existed. The ability to set and cook on an open fire or to gut a fish are all just part of the outdoors skill set. That's not to say that all Norwegians can do these things, but those who can are are seen as normal, fully paid up members of society.
What did I bring home from that trip? For one the understanding that tops are nice to visit but they shouldn't get in the way of the real issue. Just the joy of being out there is reason enough to be out there. Also, learn to be at home away from home. Everything you need to live in comfort can be loaded into a rucksack. Why spoil a good day out by later eating indoors and sleeping in a bed. Get out, set up your tent, cook a good meal and sit back and soak up some more of the outdoors.
For those still interested, here's a full report on my 2001 Gressamoen trip. For those who prefer just pictures look in my Flickr set or Picasa Album.
Posted by Unknown at 12:54