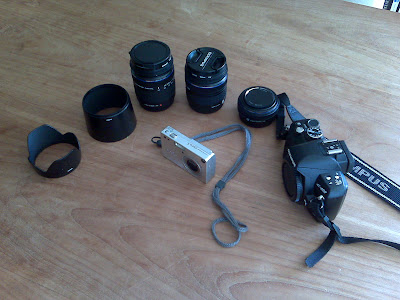 As rumblings of a group trip continue I find myself making first mental notes of my kit list. There's still talk of Norway. Sunnmore has appeared on the list. I'm keeping my mouth shut in case I break the spell.


One kit list quandary this time round is which Camera to take. It's been some years since I carried an SLR when backpacking, instead I've chosen to carry a compact digital point and press (the super-small Pentax Optio s). The original decision to move to a compact was a no-brainer really, my beloved old Olympus OM10 had been a faithful companion but, and although a radical camera in its day, it had already seen ten years of active service when I acquired it in the late eighties. It had seen better days. But, whatever it's condition and emotional value, there was no escaping it, as I strove to lighten the load, at a whopping 1700g the OM10 plus lenses, film and bag weighed over a third of what came to be my aim base weight for multi day trips and that just didn't make sense. What to do? A newer cannon EOS3000, although considerably lighter still came in at 1100g with a single, limited range, kit lens. The optio-s on the other hand, although bought with the intention of using it as a party camera, weighed just 120g complete with media card good for a 1000 frames and delivered, in most situations, an image quality that I found acceptable. 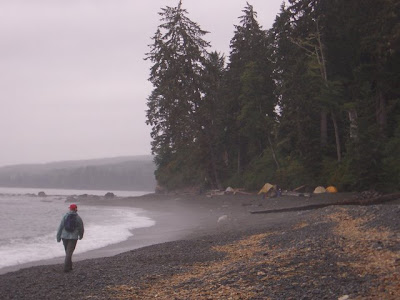 Yes, the SLRS each pack much more functionality and control, but the weight coupled with the convenience of the digital format was just too good to beat. For six years SLRS haven't had a look in.


Even the most convincing choices need to be re-evaluated periodically. The idea of going to a place like Sunnmore and not coming away with a stack of breathtaking photos troubles me. Photos have become increasingly important to me. When you make just a couple of trips a year revisiting those trips becomes more important. As I've already said, under most conditions even a simple, and now rather outdated, compact produces images which I find acceptable. The use of the words "most" and "acceptable" in that sentence give me pause for thought. Ideally, I want to be able to take outstanding photographs all of the time and, although my ability, or lack of it, as a photographer will prevent me from ever achieving that goal, perhaps the additional capability of a DSLR will get me closer? Perhaps the additional blood and sweat expended lugging a DSLR and the inevitable additional paraphernalia up the hill would be counterbalanced by the additional pleasure gained when scrolling through my photos in the aftermath? Besides, after a long period of sitting on the fence, the birth of Emily in 2007 motivated the purchase of a DSLR and my new system may just shift the balance.


Rightly or wrongly, and both opinions are stated with passion on the photographic fora, I chose to run with the Olympus 4/3 system. The E400, at the time of purchase was the lightest and most compact DSLR on the market. Even so the body and two kit lenses still add up to just under a kilogram and that figure doesn't include the weight of my Lowe Alpine topload zoom 2 case which adds another 330g. At first glance it would still seem that a compact would be a better choice. But take a closer look and you see that that weight gets you a 14-42mm and a 40-150mm capability (in old money that's 28-300mm!), the ability to capture raw files (and all that brings in terms of post processing potential) and far more options in non-ideal conditions, especially low-light conditions. Take all of that into account and it gets difficult again. Furthermore, with a bit of juggling and pairing down I can loose a lot of weight. If the big lens stays at home I've still got a respectable wide angle through to a useful zoom in the 14-42mm lens and the basic weight of the system drops to 660g. Now that begins to look like a revelation! The benefits begin to outweigh the negatives and the number begins to look like something that can be compensated for elsewhere. The Haglofs OZ pully instead of the Berghaus? The NeoAir instead of the Exped down mat?


I need to think about this some more. I also need to find an an alternative to that lead-lined Lowe-Alpine case! I can feel a home-build coming on.
Posted by Unknown at 12:58